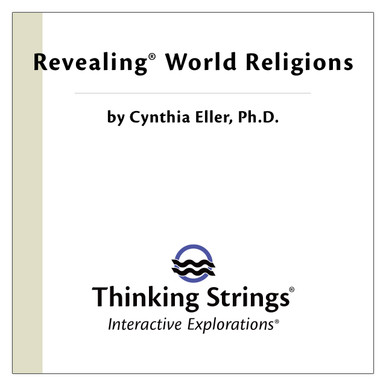 Revealing® World Religions for use with the Thinking Strings® Interactive Explorations® app; no physical shipment. You will receive a separate email with your access code and a link to the application download shortly after you complete your purchase. If you do not see the email in your Inbox, please check your Spam/Junk folder.

Interactive multimedia courseware for world religions. Students are offered a compelling look at the principles and practice of the world's major religions. The twelve modules include:

Revealing® World Religions includes twelve modules (corresponding to textbook chapters) that cover the religions most often taught in introductory religion courses—Hinduism, Buddhism, Sikhism, Daoism, Confucianism, Shinto, Judaism, Christianity, and Islam—along with modules on the academic study of religion and on religious pluralism in the 21st century. The text is designed to convey the maximum amount of information in the most user-friendly manner, and to reinforce learning with interactive exercises and a large bank of review questions. Compared to other introductory world religions textbooks, Revealing® World Religions is vastly more experiential.